The Institute of Health Metrics and Evaluation (IHME) has made detailed estimates on asbestos-caused deaths, disability adjusted life years (DALYs), and years of lost life (YLLs) and years lived with disability (YLDs) in every country of the world.

United Nations has many Programmes that have links to asbesos-related disease (ARDs). Efforts to reduce the global impact of asbestos include those made under the Rotterdam Convention on Prior Informed Consent Procedure (PIC). The UNEP announced that “all forms of asbestos should be added to an international list of chemicals subject to trade controls in 2002”.(1) Unfortunately, the inclusion of chrysotile asbestos on the PIC list has been repeatedly blocked by asbestos stakeholder governments Canada and since 2004 Russian and other governments until today.

Joint collaboration of several UN institutions and the European Union has produced a number of useful documents. For example the ILO and WHO, with financial support from the European Commission, have produced the International Chemical Safety Cards. Such cards exist on chrysotile and crocidolite types of asbestos (available in 13 languages). The Chrysotile Card says clearly under health effects that “inhalation may cause asbestosis (fibrosis of the lungs), pleural plaques, thickening and effusions. This substance causes cancer of the lung, mesothelioma, cancer of larynx, and cancer of the ovary in humans. There is limited evidence that this substance causes colorectal cancer or cancer of the pharynx or stomach”.(2) In reality, almost all countries consider only mesothelioma as a compensable asbestos related disease – if anything at all is recorded and compensated. 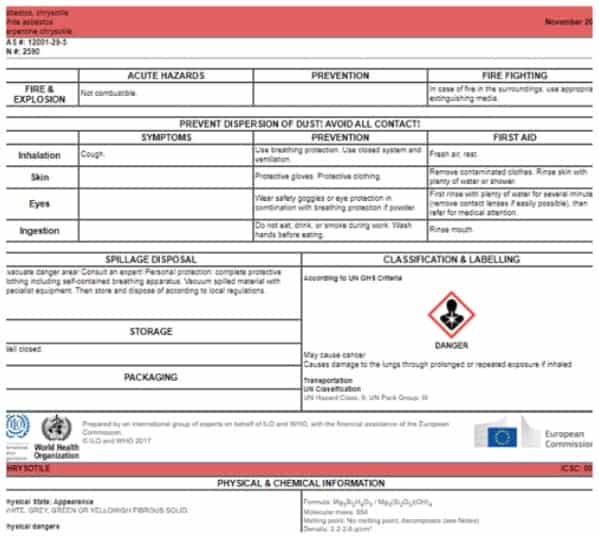 Figure 1. The Chrysotile Card in the International Chemical Safety Cards

United Nations Human Rights Council “Report of the Special Rapporteur on the implications for human rights of the environmentally sound management and disposal of hazardous substances and wastes” covers a number of examples where asbestos related deaths, diseases and disability are referred to. “Every worker has a right to dignity, to be treated ethically, with respect and without being subjected to conditions of work that are dehumanizing or degrading”.(3)

The First Supplement to the “Occupation and Health - An Encyclopedia of Hygiene, Pathology and Social Welfare” of the International Labour Office was published in 1938 and contained a Chapter on Asbestos. It was the first time any document of the ILO referred to cancer in relation to asbestos when identifying the criteria for action in asbestos-related workplaces. Asbestosis had been well recognized already at that time but the magnitude of the problem was revealed gradually when the carcinogenic properties of all kinds of asbestos fibres were convincingly identified.

It took 40 years to start international action. The ILO Asbestos Convention No. 162 was adopted in 1986. This Convention itself was a compromise of the pro-asbestos parties and those who wanted strict measures to stop using asbestos. Later, the Convention wording was misused against the original intent by using the expression “safe use of asbestos” out of context of the ILO instruments.

Most of the asbestos exposures and adverse effects were considered to be linked to asbestosis and mesothelioma until recently—this millennium—when the magnitude of lung cancer, ovary and larynx cancer deaths have come to be better known.

ILO Resolution Concerning Asbestos(4) in 2006 finally corrected the missing parts of the Convention in stating that “all forms of asbestos, including chrysotile, are considered as known human carcinogens” and “elimination of the future use of asbestos and the identification and proper management of asbestos currently in place are the most effective means to protect workers from asbestos exposure.” This was unanimously agreed by the three constituents of ILO by delegates of governments, workers and employers.

The ILO/WHO Joint Program on ARDs was established by the Joint ILO/WHO Committee on Occupational Health in 2003 as proposed by ICOH.(5)

It desperately needs revitalisation at national levels. ICOH has joined forces with a number of other organisations in organising several events and preparing materials for prevention purposes. ICOH joined the ILO/ISSA Congress in Frankfurt in 2014 at a Special Session on Asbestos. Similarly, ICOH arranged an occupational cancer session in Singapore discussing asbestos. ICOH has strongly supported the Statements to ban asbestos e.g. by the Collegium Ramazzini. The latest product supported by ICOH includes a podcast entitled “Revitalising Attention on the Global Asbestos Disaster”.(6)

WHO has had a strong and clear voice based on the WHO overall strategy saying that all types of asbestos are carcinogenic. WHO has supported various programmes to reduce the burden caused by asbestos. As a whole WHO and other UN bodies are as strong as the member States allow them to be. The support provided by many influential member States has not been sufficient to tackle asbestos.

WHO has made a number of Environmental Health Criteria documents on asbestos and many related publications on practical and preventive guidance.

IARC scientists have further published scientific evidence that asbestos caused lung cancer is much more common than mesothelioma: depending on type of use some 3.6 - 10.5 times more common, and deaths caused by asbestos related lung cancer are an average of 6.1 times more frequent than those of mesothelioma deaths for chrysotile asbestos.(7) As a result mesothelioma has been used as a proxy for asbestos exposure when estimating lung cancer deaths. Lung cancer is very poorly recognised as asbestos-caused because the outcome may be caused by other combined factors, such as smoking, blurring the significant role of asbestos. Health and medical staff may be unaware of and need to find out possible exposures

International regional and national trade unions have had a major role both within ILO in setting international standards, promoting them, organising training programmes, preparing materials, and separately activities of their own. For example, the European Trade Union Institute has published key studies, reports and materials on elimination of asbestos from places at work, and sponsored cost calculations on cancer caused by asbestos and other carcinogens.(8)

Institute of Health Metrics and Evaluation

The IHME is located in the United States and has continued the Global Burden of Disease and Injury (GBD) activities originally started by the WHO some 25 years ago. While the IHME data is primarily concentrating on overall public health the asbestos outcome estimates have been made for practically every country and region of the world. The hundreds or even thousands of contributors all over the world provide a large dataset complementing sources from the WHO and ILO. The GBD 2019 estimates for asbestos related cancer deaths and disability adjusted life years - while such data is not always publicly available from the countries themselves - are likely to be currently most reliable for a large number of countries, in particular, in developing countries.

Selected latest Global Burden 2019 data(9) is enclosed in Table 1 below. The latest data show a continuous increase of the magnitude of asbestos-related death and disability Asbestos causes further deaths that are non-occupational, some 10% may be added to get occupational and non-occupational together. Past estimates, such as those by the ILO at the ILO-ISSA Congress in Sao Paulo 1998 - 100,000 deaths, and the WHO 108,000 deaths ten years later have been shown to be under-estimates. Judging from the mesothelioma numbers it appears that these new numbers are certainly not over-estimates either.

Key WHO resources on asbestos: https://www.who.int/teams/environment-climate-change-and-health/chemical-safety-and-health/health-impacts/chemicals/asbestos