1.9.4 National Situation in the Philippines

History and Policies on Asbestos Use and Management in the Philippines

One of the requirements of The National Building Code of the Philippines of 1972 (amended in 1977) is to have a fire-resistive of one-hour up to four-hour time period rating.(2) Asbestos material is highly resistant to fire and least expensive; hence, it has become among the preferred and most popular materials to use in the Philippines.(3)

When work-related diseases became a concern among workers, the Department of Labor and Employment (DOLE) implemented and enforced the occupational exposure standards of various substances including asbestos. In 1989, the DOLE Occupational Safety and Health Standards (OSHS) mandated for the industries to report work-related issues or diseases that may be attributed to occupational exposure including asbestos.(3) On April 21, 2016, Department Order No. 154 Safety and Health Standards on the Use and Management of Asbestos in the Workplace took effect bringing the asbestos standard to a more stringent occupational exposure concentration – from 2 fiber per cubic centimeter (f/cc) to 0.1 f/cc in an 8-hour work period.(4) Also, the Employees’ Compensation Commission considered Asbestosis as one of the compensable work related diseases in 2012.(7)

One of the general recommendations of the International Program on Chemical Safety Working Group Meeting on the Reduction of Asbestos in 1988, “Countries that do not have established policies for the control of hazards related to the presence of asbestos in the environment should develop guidelines for this purpose.”(5) In 1990, the Republic Act 6969 known as “Toxic Substances and Hazardous Wastes and Nuclear Wastes Control Act” was enacted. This Law mandated the Department of Environment and Natural Resources (DENR) to keep an inventory of chemicals that are being imported, manufactured, or used; and to monitor and regulate the importation, manufacture, processing, handling, storage, transportation, sale, distribution, use and disposal of chemical substances and mixtures.(6)

In 2000, after a decade of Republic Act No. 6969, the DENR Administrative Order (DAO) 2000-02 Chemical Control Order for Asbestos was issued. This law controls and regulates the use and disposal of asbestos. It specifies that the use of amphibole group of asbestos particularly amosite (brown) and crocidolite (blue) asbestos fibers and of products containing these fibers as strictly prohibited.(8) For that matter, chrysotile asbestos was predominantly used and its disposal is being controlled. 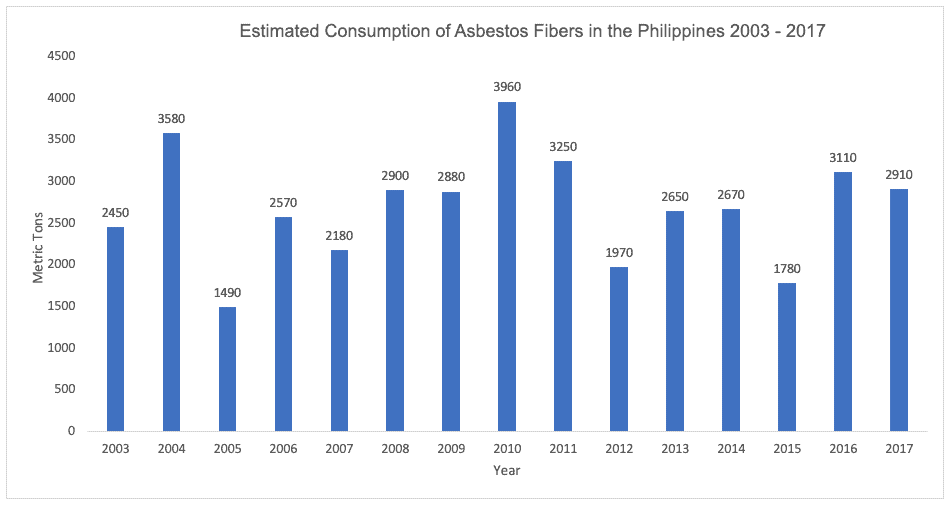 Figure 1. Estimated consumption of asbestos fibers in the Philippines 2003-2017

From the results of the study conducted on Policy Alternatives, 5,289 workers were exposed to asbestos and 30,000 workers were indirectly exposed working in 143 companies nationwide (Table 1). The asbestos-exposed worker could contribute around Php 1.08 Billion (inflation-adjusted) in the economy in 20 years; while the indirectly exposed could give as much as Php 6.8 Billion (inflation-adjusted).(3)

As of this moment, the closure of the Philippines largest shipyard Hanjin in 2019 employing 30,000 at its peak could mean a much lower economic contribution of the directly-exposed workers than indirectly-exposed.

Reported Cases of ARD in the Philippines​

According to Table 3 below, there were 482 cases of asbestos-related diseases in a span of 15 years from 1997 – 2012; a relatively small number of recorded cases.(3) The number of ARDs cases in the Philippines is not as alarming as compared to developed countries such as Germany, United States, Canada and others. These small recorded cases may not reflect the true scenario for the following reasons:

From the presented data 7 out of 10 subject workers had ARDs. Hence as per the reported cases in Table 2, the presented number of cases were probably underreported.

To enhance the monitoring mechanism, Asbestos Training Workshop for the Philippines was conducted by Asbestos Disease Research Institute team in July 2019. The goal of the asbestos training workshop was to advance the capacity of the Philippines to detect diagnose and treat cases of ARDs especially mesothelioma.(15)

As such, it is necessary to have a tangible framework for medical/health surveillance mechanism including reporting system especially for archipelagic islands like the Philippines, and continuous regular monitoring of all workers in all sectors including informal sectors and the public whether directly or indirectly exposed to asbestos.(3)

This can be conducted through an asbestos profile and medical surveillance network in collaboration with bureaus and agencies both in the regional and main offices concerned with ARDs, and the companies utilizing asbestos fibers and ACMs. Asbestos data banking should be made available and accessible to research professionals, law makers, and other pertinent authorities.

The Philippines may also need to have ARDs information dissemination down to local units to make the community (i.e. both the public and workers) aware of the hazards of asbestos, sign and symptoms of ARDs, how to avoid being exposed to such fibers and contact details in case of in adversity. An asbestos awareness and campaign will be beneficial as they will know how to protect themselves.

The data from surveillance system and medical records can also be used as a secondary data for research. As such, research must be also instituted for in-depth study with regards to the profile, work environment, worker’s exposure, epidemiology and others especially for chrysotile type of asbestos.

One of the key components of National Program for Elimination of Asbestos-related Diseases (NPEAD) is to have a National Asbestos Profile (NAP) on WHO and ILO template. The NAP for Philippines was completed in 2014 by the Department of Health in collaboration and consultation with other concerned agencies and Technical Working Group members. It is intended to facilitate countries especially those that are still using chrysotile type of asbestos to eliminate asbestos-related diseases through development of national asbestos programs. This NAP also provided a baseline information on ARDs, asbestos utilizing companies and population at risk of ARDs.(1)

Inclusion of Chrysotile Asbestos in Annex III of Rotterdam Convention

The impact of inclusion of Chrysotile asbestos and asbestos containing materials in Annex III of Rotterdam Convention, the Philippines can monitor its entry, sale and use, stop illegal trade, and protect human health and the environment. Also, according to the conducted independent health risks assessments of European Union, Chile and Australia, “Chrysotile asbestos was carcinogenic to humans and that there was no threshold of exposure below which asbestos did not pose carcinogenic risks” (EU), “there were no thresholds for the carcinogenic effect of chrysotile asbestos” (Chile), and “human exposure was associated with an excessive risk of asbestosis, lung cancer, and mesothelioma” (Australia).(17)

Various professional networks and organizations support the inclusion of chrysotile asbestos in Annex III of Rotterdam. EcoWaste Coalition based its decision from the researchers and WHO that “all types of asbestos can cause cancer to human”. Similarly, PAN Philippines centered their decision on the International Agency for Research on Cancer established findings that “there is sufficient evidence of carcinogenicity in humans for all types of asbestos”.(17) However, the Association of Chrysotile Asbestos in the Philippines, an association of local asbestos industry, decision was against the chrysotile inclusion. The reasons were based generally on social impact, and the concern on the banning of their raw materials – the chrysotile asbestos. However, banning of chrysotile asbestos in not the concern of the Convention but rather a national legislative or administrative measure.(17)

For that matter, the Philippine government supports the inclusion of chrysotile in Annex III. This will enhance the information exchange, national capabilities, management of chemicals, and local based information database for the improvement of national policies.(17)

​DO 154 lowered the occupational exposure threshold for asbestos fibre from 2.0 to 0.1 fibre/cc. However, this exposure concentration which was also similar to other countries, has been questioned by scientific community for “lack of scientific rigor, inadequate medical input, and lack of attention to financial conflicts of interest”.(20) since all asbestos fibres are considered carcinogenic, it might be wise to have a research specifically for chrysotile asbestos - more data of exposure both for asbestos and ACM, and association to ARDs. This is to determine the realistic exposure concentration that might cause an ARD and finalize the safest exposure level.

In 2014, there were 143 manufacturers and processing companies of chrysotile asbestos in the Philippines employing 5,289 workers. First and foremost, as per data have shown that these exposed workers can contribute Php 1.08 billion annually for the economy. However, the 30,000 indirectly exposed workers can contribute about Php 6.8 billion annually. The economic loss (in case of banning is approximately Php 1.08 billion as contributed by the exposed workers) is relatively small as compared to the societal cost (Php 6.8 billion per year contribution of indirectly exposed workers to economy) to the national economy.(3) Additionally, these 5,289 workers (in case that they would have ARDs), will spend Php 13.2225 billion (utilizing an average of Php 2.5 Million per year per patient). ARDs from occupational exposure are considered compensable as per government regulation.

More so, the manufacturers and processing companies can utilize safer alternatives for asbestos. These asbestos alternative materials can alleviate their financial loss.