While industrially contaminated areas are a concern for residents’ health (3), the impact of other non-occupational exposure scenarios on the health of the general population should also be considered. For example, the use of asbestos cement pipes results in asbestos fibers contaminating the drinking water, asbestos-containing houses raise concerns of inhaling asbestos fibers during demolition among nearby residents, and natural mining resources raise concerns of inhaling uncovered asbestos fibers through the wind. Given that non-occupational asbestos exposure may persist even in countries that have banned asbestos, the health risks associated with non-occupational asbestos exposure should not be neglected.

Other parameters include the number of sources (as a proxy indicator of the intensity of asbestos exposure) and type of asbestos fiber (as a proxy indicator of residential exposure to certain asbestos minerals identified in the geographic location).(5) Table 1 summarizes some common methods for assessing non-occupational asbestos exposure and examples of exposure occasions. It should be noted that people may be exposed to multiple sources of asbestos.(4) Investigating multiple exposure pathways can help estimate the attributable fraction of asbestos-related disease occurrence and develop preventive actions. 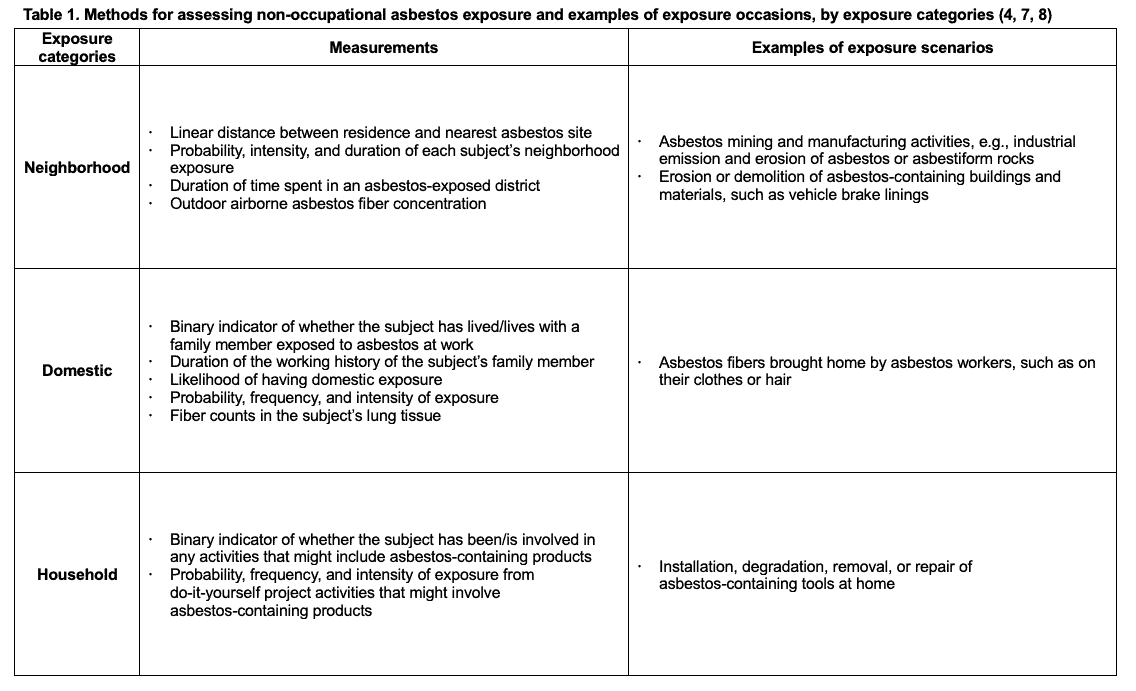 Mesothelioma incidence is more prevalent in adults aged 50-60 years old but rare in younger subjects. Given the long latency period of mesothelioma, prevention of early exposure is a prerequisite for eliminating the disease burden. Studies have shown that boys and girls who attended schools and lived near an asbestos cement plant later in life have a higher increased risk of mesothelioma.(11-13) Therefore, for mesothelioma cases without a history of occupational exposure, tracing the non-occupational exposure history, including childhood exposure, may help to understand exposure scenarios. 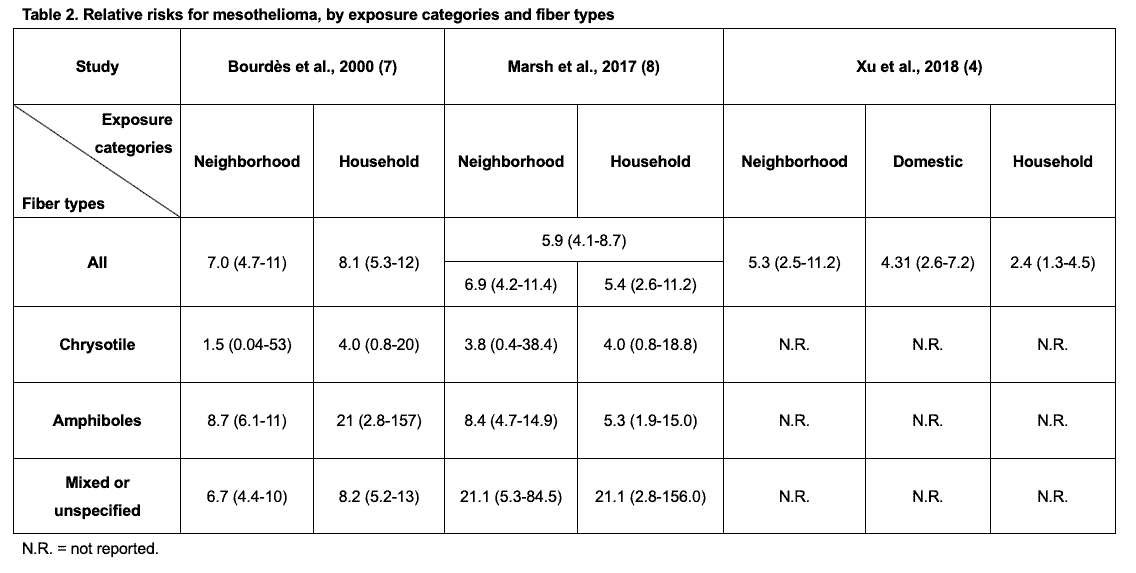 Third, mesothelioma has a long latency period, but is a deadly disease once it is diagnosed. A national surveillance and registry system of mesothelioma and other asbestos-related diseases capturing cases, in a timely manner, is important to facilitate many unanswered scientific and legislative needs and uncover non-occupational asbestos scenarios and disease incidence and mortality.(9) For example, after the Kubota Shock, the Japanese government instituted the “Asbestos Victims Relief Law” to cover compensation for non-occupational cases. Studies about the Kubota victims indicated that the standardized mortality ratios of mesothelioma for residents living within 1.5km from the Kubota plant were significantly high.(16) Such epidemiological reports help establish the relationship between exposure and disease and further help victims get compensation.

​​Non-occupational asbestos exposure poses a hidden health risk to the general public. Academic research and international experience-sharing can contribute to the understanding of non-occupational exposure scenarios, the measurement of exposure level, and management of health risks. For countries that have banned asbestos, we may now just be beginning to see the effects of the asbestos ban. Countries that have not implemented a total asbestos ban can still start doing so.(9)