The manufacturing, use, and import of all asbestos products/materials and all forms of asbestos were banned in Korea on January 1, 2009. In detail amosite and crocidolite was banned on May 1997 (effectively Jan 2000), and actinolite, anthophyllite and tremolite were then banned on July 2003, and chrysotile was banned in 2009.(7)

Asbestos was used widely in construction materials, automobile manufacturing industries, and asbestos textile products. The majority of asbestos-containing construction materials was slate roof tile and insulation material. The widespread use of asbestos containing materials (ACMs) and products has resulted as remnants in the built environment such as residential homes, schools, public buildings, and publicly-used establishments. For example, the Ministry of Education surveyed all preschools, elementary and secondary schools in Korea (N=19,815) between 2008 and 2009 and found that 85.(7) percent (N=16,875) of schools had ACMs and products. The Ministry of Environment also reported that approximately 46 percent of rural residents’ houses contain asbestos slate roof (surveyed in 2009) due to a widespread renovation project of traditional roofs in rural areas in the 1970s.(2) 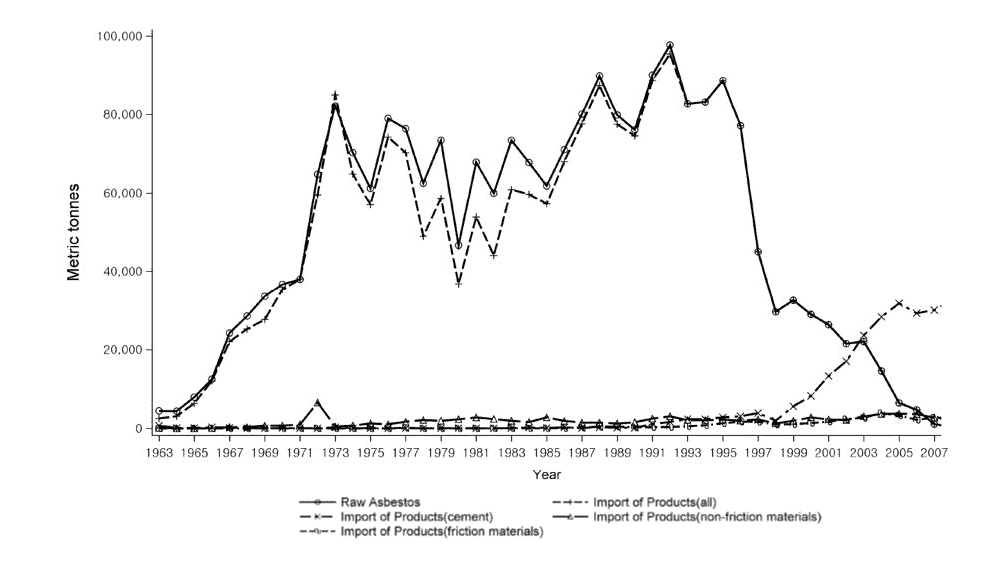 There were no experiences in asbestos-related harmful effects at workplaces, and concerns of public health and environmental issues in early stage of asbestos use were masked by shortage of scientific evidence and prioritization of economic growth. However, occupational exposure to asbestos in workplaces and asbestos-related jobs had occurred during this period which leads to the development of ARDs decades past first exposure.

The majority of occupational exposure to asbestos at present occur during the removal, demolition and renovation of asbestos containing buildings and houses which were built before 2009. Environmental exposure to asbestos has been assessed to prevent asbestos induced adverse health effects. Nationwide mapping of naturally occurring asbestos (NOA) has been conducted to identify areas which are subject to ground-disturbing activities such as commercial and residential development, social overhead capital projects and agricultural development. Identification of NOA areas is very important to lead environmental health assessment and to reduce adverse health effects on residents and workers during ground-disturbing activities. In addition, when ACMs are disturbed and release asbestos fibers into the air, they become a health risk that raises social and environmental attention. Schools attract considerable attention in this regard.

The Occupational Safety and Health Act was the first law for asbestos regulation in 1981. Since then the management and regulation of asbestos have developed in consideration of the risks due to asbestos exposure. There are several ministries involved in asbestos management and regulation to protect occupational and environmental asbestos exposure. For example, the Asbestos Safety Management Act, the Occupational Safety and Health Act, the Wastes Control Act, the Building Act, the Asbestos Injury Relief Act have been implemented regulating asbestos-related issues and health problems in Korea.

The Asbestos Injury Relief Act enforced on 1 January 2011 under Ministry of Environment states its purpose to redress damage to health caused by asbestos in a prompt and fair manner by seeking measures to pay benefits to asbestos-inflicted disease suffers and their bereaved family members that had a history of environmental asbestos exposure. This act is to provide medical benefits, allowance for medical care and living costs, relief benefits adjustment money and funeral service expense special condolatory expense and special funeral service expense for the bereaved families. Asbestos-related diseases such as asbestosis, diffuse pleural thickening, lung cancer and malignant mesothelioma have been covered by this Act but do not apply to persons who are eligible under the Industrial Accident Compensation Insurance Act or any other statute prescribed by Presidential Decree.

Despite the ban, there are still a large number of asbestos containing buildings such as especially schools, which remain a health threat to.