The main symptoms of malignant pleural mesothelioma (MPM) are chest pain, dyspnea, and non-productive cough. Patients may also have unexplained fever and weight loss, but in the early stage of MPM, there are no symptoms; the chest oppression sensation and exertional dyspnea are realized with the increase in pleural effusion. Although the cough is not strong, the cough comes out in the initial stage of the disease by the stimulation of pleural effusion transfer by body movement. Chest pain is absent early in the disease but develops gradually as chest wall invasion begins. However, these symptoms are not characteristic of mesothelioma and are often delayed in early detection.(1) As the disease progresses, the tumor grows markedly, the chest wall and vertebral bodies become highly infiltrated, and pain becomes the main symptom. In general, patients with MPM have more severe subjective symptoms than patients with other cancers.(2)

These findings are important in differentiating between benign and malignant pleural lesions; the sensitivities are 41%, 51%, 36%, and 56%, respectively, and the specificities are reported to be 100%, 94%, 94%, and 88%, respectively.(6) If one or more of these findings are present, the possibility of malignancy is extremely high.(7,8)

Therefore, if a patient with a history of asbestos exposure has pleural effusion or pleural thickening, MPM should be listed as one of the differential diagnoses, and a definitive diagnosis should be obtained actively.

The definitive diagnosis of pleural mesothelioma requires definitive tissue diagnosis by pleural biopsy, which may include percutaneous needle biopsy (blind biopsy, image-guided biopsy with computed tomography or ultrasound), medical (under local anesthesia) thoracoscopic biopsy, or surgical (thoracoscopic thoracotomy) biopsy. The gold standard for biopsy is thoracoscopy, and the diagnosis rate is reported to be over 95%.(9,10) 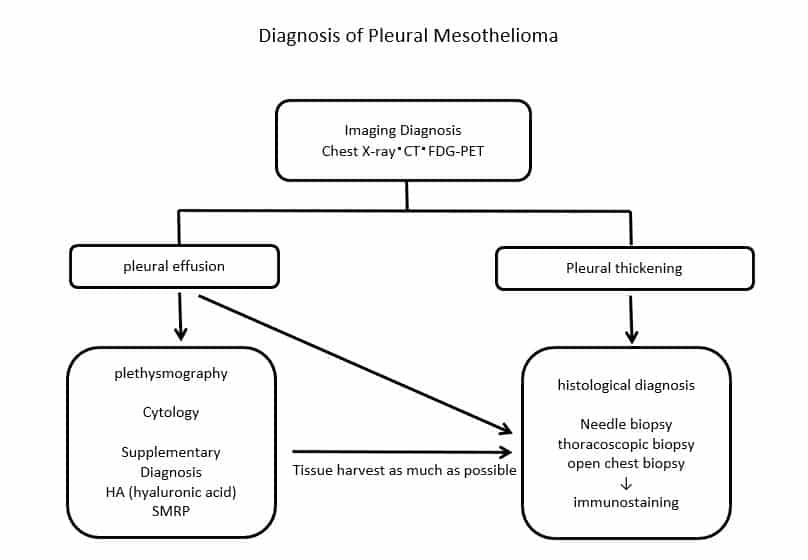 MPM arises from neoplastic transformation of mesothelial cells of the pleura. Epidemiological studies have proven that occupational and environmental exposure to asbestos is the main cause of the development of MPM.(11) Once asbestos is inhaled, it penetrates the alveolar barrier and reaches the lung interstitium. Asbestos is then pulled out from the lung interstitium by pulmonary lymph flow and subsequently translocated across the visceral pleura due to the increase of pulmonary interstitial pressure mediated by asbestos-induced inflammation. Subsequently, asbestos appears in the pleural space where the pleural fluid is continuously being discharged through stomata in the parietal pleura. Asbestos is carried away by convective pleural fluid flow and finally accumulates in the parietal pleural stomata.(12,13) Thus, asbestos mainly affects the parietal mesothelium rather than the visceral mesothelium.

Both parietal and visceral mesothelium are composed of a single layer of mesothelial cells. When asbestos reaches the parietal pleura, it induces necrosis in mesothelial cells along with the extracellular release of damage-associated molecular patterns, such as high-mobility group protein B1 (HMGB1), while also triggering the activation of the Nod-like receptor protein 3 (NLRP3) inflammasome. While HMGB1 activates nuclear factor κB (NFκB) and induces tumor necrosis factor α (TNFα) secretion and pro-interleukin 1β (pro-IL1β) production through the interaction with Toll-like receptor 4, the activated NLRP3 inflammasome promotes maturation and secretion of IL1β.(14) Asbestos cannot be completely eliminated and remains in place for a long time despite undergoing phagocytosis by macrophages.(13,15) Macrophages attempting to phagocytose asbestos also release abundant inflammatory cytokines such as TNFα and IL1β by a similar mechanism. Several studies have indicated that TNFα and IL1β play key roles in asbestos-related mesothelial carcinogenesis.(16,17) Thus, persistent inflammation in parietal mesothelium contributes to the development of MPM.

Even after the transformation of mesothelial cells into malignant mesothelioma, inflammatory cytokines derived from tumor-associated macrophages (TAMs), a major component of the MPM microenvironment, continue to play a huge role in the progression of MPM. A recent study demonstrated that MPM cells abundantly express the IL1 receptor, and tumor-associated macrophage-derived IL1β enhances the malignant potential of MPM cells.(18) Thus, persistent inflammation in the mesothelium contributes not only to the development but also to the progression of MPM.

Once MPM develops, it spreads along the pleural surface. Unlike other types of cancer, a concentrically enlarging mass recognized as the primary tumor is rarely detected. Multiple nodules are diffusely observed in the pleural cavity accompanied by pleural effusion.(19) Due to the unique extension and the low incidence of MPM, a universally accepted TNM classification for MPM has remained unestablished. The International Association for the Study of Lung Cancer (IASLC) performed a large-scale retrospective analysis of the prognosis of patients with MPM to establish a novel staging system in MPM. According to the IASLC’s information, the eighth edition of TNM classification for MPM was published and is currently available (Tables 1, 2).(20) 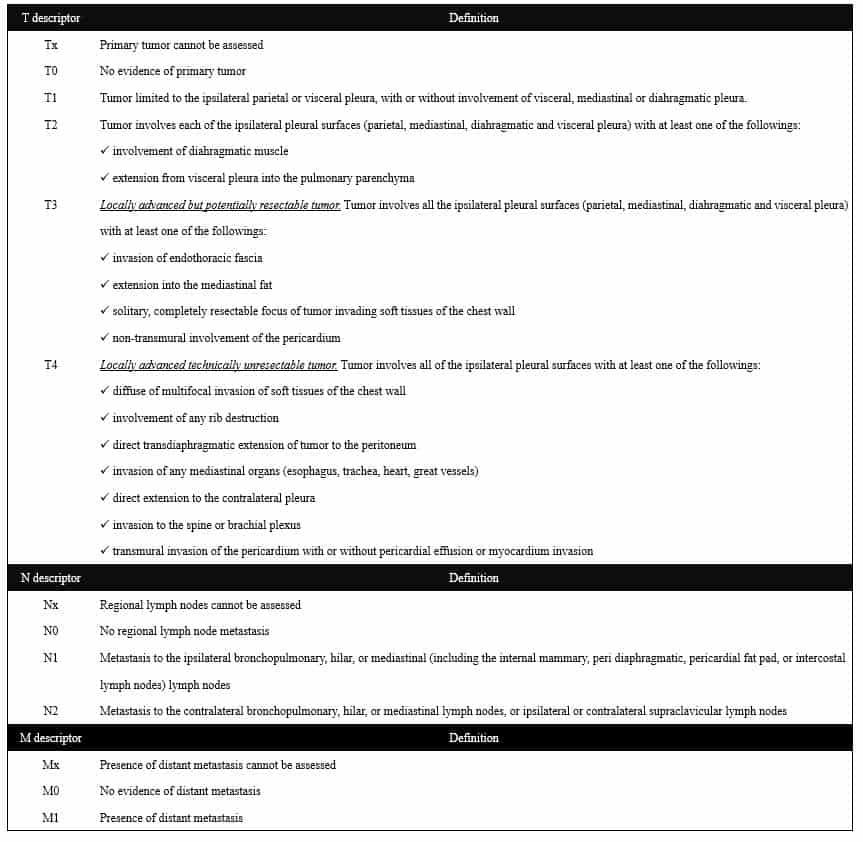 The T component of the TNM classification refers to the primary tumor. In most malignancies, it is determined by measuring the size of the primary tumor. However, it is quite difficult to measure the size of the tumor in MPM because MPM spreads diffusely along the surface of the pleura. Therefore, T descriptors in MPM are determined by which parts of the pleural surfaces are involved, as shown in Table 1.(19) It is clinically valuable to determine a T descriptor reported to be associated with overall survival (OS) in MPM patients receiving surgical management.(21)

Based on statistical analysis of survival data of patients with MPM, the IASLC proposed a novel staging system (Table 2).(20,23) Although this is the first evidence-based staging system in MPM, accumulation of further clinical data will be necessary to confirm its reliability.

The principle of surgical oncology is to resect all gross tumors with an adequate margin. However, microscopically free resection with a secure margin cannot be obtained in MPM surgery due to its anatomical location. Therefore, curative resection (R0 resection) cannot be achieved in MPM surgery and the surgical goal for MPM is to achieve macroscopic complete resection (R1 resection) by resecting all visible and palpable lesions.(21) The presence of residual tumor cells must be tolerated pathologically in R1 resection, which can lead to a decrease of curability.

Since surgical cytoreduction as a single modality is generally insufficient as noted above, it is strongly recommended that multimodal therapy with chemotherapy and/or radiation therapy be administered. Effective pre- or postoperative chemotherapy and/or adjuvant radiation therapy should be given for patients for whom cytoreductive surgery is performed.(24,27) Regarding histology, surgery for epithelioid and mixed-type MPM is recommended. Patients with confirmed sarcomatoid-type MPM are not candidates for surgery because chemotherapy is generally not effective with a poor prognosis.(28,29)

Surgical resection for patients with MPM mainly consists of extrapleural pneumonectomy (EPP) and pleurectomy/decortication (P/D). In EPP, the involved pleura, ipsilateral lung, diaphragm, and pericardium is resected en bloc. P/D refers to the resection of all gross tumors with parietal and visceral pleura, sparing the ipsilateral lung. Extended P/D refers to the removal of the diaphragm and pericardium in addition to standard P/D. The choice of surgical form is controversial because there are no randomized control studies comparing EPP and P/D surgery. In the past, EPP was the most commonly used approach because it was hypothesized that EPP was less likely than P/D to leave residual malignant cells. Nevertheless, recent studies have reported that neither EPP nor P/D results in complete R0 resections and a systematic review comparing EPP and P/D shows similar OS (MST: 12-22 months vs. 13-29 months).(30-32) There has been a shift in choice of surgical form toward extended P/D in place of EPP because EPP is associated with a higher morbidity and mortality than is P/D.

As another limitation, we have no established indication for MPM surgery because there is no scientific evidence that surgical treatment improves the prognosis, and selection bias is often present in retrospective studies. Patients chosen for surgery must be carefully selected and considered by multidisciplinary experts.

​Radiation therapy (RT) for MPM is currently used as part of multimodal therapy. However, RT alone is not recommended for treatment. RT after surgical intervention was associated with improved survival in the largest retrospective study of adjuvant radiotherapy.(33) RT is widely used for other purposes, such as palliative treatment for cancerous pain and as port-site prophylaxis without chemotherapy

​Postoperative adjuvant chemotherapy after EPP may reduce the local recurrence rate.(34-37) The recommended radiation dose for adjuvant therapy following EPP is 45-60 Gy in 1.8-2.0 Gy. A dose of 54 Gy given to the entire hemithorax, the thoracotomy incision, and sites of chest drains was well-tolerated.(28,38)

​P/D is considered to be a less invasive surgery than EPP. However, in the presence of normal lungs, high-dose conventional RT to the entire hemithorax does not show prolonged survival and instead significantly enhanced toxicity.(39-40)

With advances in RT technology, hemithoracic irradiation by intensity-modulated radiation (IMRT) after P/D has been performed. IMRT is an advanced radiation technology that can more effectively avoid irradiation of normal tissues by concentrating radiation on the tumor with a high dose. IMRT can avoid irradiating the ipsilateral lung, heart, and intra-abdominal organs and may be more effective and less toxic in treatment. Therefore, IMRT has been applied as a standard method in recent clinical trials. However, contralateral low-dose radiation may increase the risk of fatal radiation pneumonia.(41)

In a Phase II study evaluating the use of hemithoracic pleural IMRT (50.4 Gy/28 Fr) following chemotherapy and P/D, radiation pneumonitis was reported in 30% (8/27) of evaluable cases (grade 2 in 6 patients, grade 3 in 2 patients) that was reversible with corticosteroids.(42) This study showed the safety of this new trimodal therapy. Hemithoracic IMRT may be the new standard treatment after P/D, and a direct comparison study with adjuvant chemotherapy should be considered to validate the efficacy of postoperative hemithoracic IMRT.

​The optimal dose of palliative RT is still unclear.(43-44) A dose of 20-40 Gy was effective for alleviating chest pain in patients with MPM chest pain.(45-47) In a retrospective study, more than 40 Gy in 4 weeks was effective for dyspnea, dysphagia, superior vena cava obstruction, and symptoms of brain metastases.(48)

Treatment of malignant mesothelioma is determined by comprehensively evaluating staging by the International Mesothelioma Interest Group (IMIG) classification and histological classification by the World Health Organization (WHO) classification. Generally, surgery is the main treatment for resectable cases, and chemotherapy is the main treatment for unresectable or postoperative recurrence cases. On the other hand, RT is often given as part of multidisciplinary treatment combined with surgery and may be given as palliative therapy for the purpose of pain control.

It is often difficult to determine the indication for surgery and RT for MPM, and it is necessary to make a multidisciplinary decision involving a respiratory physician, respiratory surgeon, and oncologist.

Monotherapy with vinorelbine (VNR) or gemcitabine (GEM) in second-line treatment have had limited effects in Phase II trials, but their ORR was 7% to 24% and OS was 8.0 to 10.6 months.(37,55,56) Therefore, VNR or GEM administration may be considered in second-line therapy.

The prognosis of MPM is poor regardless of histological type, but it is particularly poor for the sarcomatoid type. In a large retrospective study, epithelioid disease experienced the highest median OS (14.4 months), followed by biphasic (9.5 months) and sarcomatoid (5.3 months) disease.(57) After propensity matching in this study, surgery improved OS for the epithelioid (20.9 vs. 14.7 months, P < .001) and biphasic types (14.5 vs. 8.8 months, P=.013), but not the sarcomatoid type (11.2 vs. 6.5 months, P=.140). Furthermore, on multivariable analysis, chemotherapy was independently associated with improved OS (HR; 0.72, 95% CI; 0.59-0.86, p <.001). Based on the above, multimodal therapy for MPM is likely to improve the prognosis and should be actively investigated.

The Authors of this section would like to thank Editage for English editing (current page of e-Toolkit only).